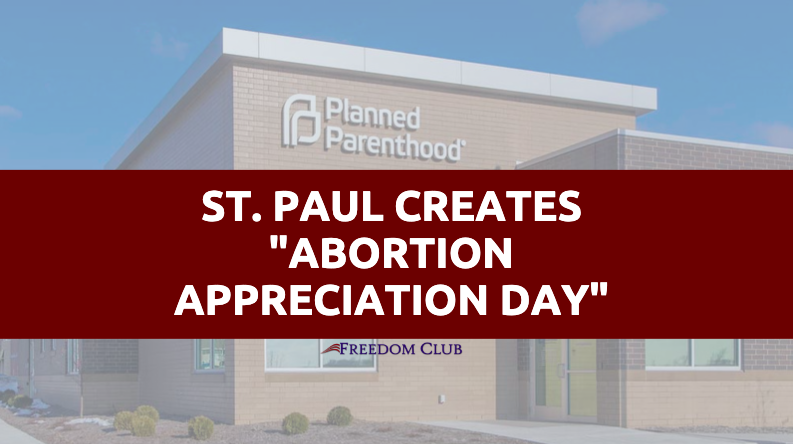 Minnesotans have a new day to mark on their calendars. It lands between President’s and St. Patrick’s Day.  St. Paul’s city council recently established March 10th as “Abortion Providers Appreciation Day”. The day honors abortionists in light of pro-life laws gaining traction.  The despicable day of recognition was passed by the city council with an unchallenged 7-0 vote. The council’s actions reflect the disturbed and callous views of unborn life shared by Minnesota’s left.

By approving an Abortion Appreciation Day, St. Paul’s leaders declared abortionists as heroes to our society.  They have given dignity to those who slaughter innocents on a daily basis. The council has not only deemed abortion practices as acceptable, but they have also glorified them.  Among all service members and contributors in our state, abortion providers have been chosen to be validated by our leaders.

St. Paul’s decision signifies how the left has derailed the cultural and moral values of Minnesota.  Despite one’s personal beliefs of abortion’s legality- it deserves to be considered a grave subject matter.  The termination of innocent life has become celebratory because liberals have had unchecked political control.  A day made to honor abortion providers is a perversion of the government’s duty to protect life.

The city council is not representing shared local values.  Instead, their action has cast a shadow on our society. The council’s decision should serve as another wake-up call to Minnesotans.  If we do not think that abortion is an honorable tenet of our society, political action is necessary. Praising abortion is unacceptable and we must demand a government that is committed to protecting all American lives.

Help us continue to fight for the dignity of human life by donating to the Freedom Club today!